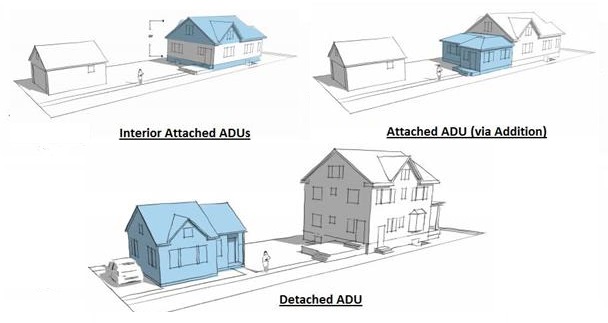 To combat the housing crisis, the California legislature passed a series of statutes that make it easier for property owners to construct Accessory Dwelling Units (“ADUs”) and Junior Accessory Dwelling Units (“JDUs” or “JADUs”) on their property. These changes in statutes and the increased use of ADUs and JDUs, necessitate that associations quickly adapt to avoid unintentional violations of the new statutes and ensure that these new types of units are implemented in a manner that least disrupts the preexisting units.

Before we can discuss the legal implications of ADUs and JDUs, it is important to define what they are. ADUs (also known as casitas, guest houses, or mother-in-law/granny units) are attached or detached residential units located on the same legal lot as an existing single-family residence that provide complete independent living facilities for one or more persons. JDUs are residential units contained entirely within an existing single-family residence that are no more than 500 square feet in size.

The amended Government Code § 65852.2 allows for local agencies to provide ordinances for the creation of ADUs in areas zoned for single-family or multifamily residential purposes. In order to facilitate the use of ADUs, the statute also empowers local agencies to reduce or eliminate parking requirements; allows for ADUs to be rented separately from the primary unit; and sets a bar for the standards an agency can impose for their approval.

While it predominately supports ADUs, Government Code § 65852.2 does impose some restrictions on their implementation. These restrictions include: limitations on selling ADUs separately from the primary unit; limitations on the size of ADUs to 50% of the primary dwelling unit if attached or 1,200 square feet if unattached; and requirements that agencies that want to implement ADU ordinances consult with local water and sewer agencies to see if they are feasible.

Government Code § 65852.22 resembles the previous statute but for the implementation of JDUs. This statute permits local agencies to impose permit requirements for JDUs and requires approval of JDUs if the minimum statutory standard is met and an ordinance has not been adopted by the local agencies. It contains a series of clauses that make approval and construction of JDUs easier, such as: a ban on ordinances imposing a parking requirement for the approval of JDUs; allowing for JDUs to be treated as part of the primary unit for fire and life protection ordinances, as well as, for water, sewer, and power connection fees; and setting a low maximum standard for approval of a permit for a JDU.

Of these ADU statutes, the one which causes the most challenges for associations is Civil Code § 4751. This section voids covenant, restriction, or condition in governing document that prohibits or “unreasonably restricts” the construction or use of ADUs and JDUs. Problems with Civil Code § 4751 most obviously occur when an association’s CC&Rs expressly prohibit ADUs or JDUs.
Less clear conflicts between CC&Rs and Civil Code § 4751 arise when otherwise reasonable and often commonplace restrictions would interfere with the construction or implementation of ADUs or JDUs.

One such conflict arises from prohibitions on using a unit’s garages for any purpose that would prohibit two vehicles from being stored within as that would preclude using the garage as an ADU or JDU. Conflicts could also arise from requirements that single-family units be used for single-family purposes as it would prohibit the renting of ADUs or JDUs and restrictions against erecting structures other than the primary residence on a property as that would prevent the construction of a detached ADU.
The best way to avoid conflicts between Civil Code § 4751 and your governing documents is to ensure that both your CC&R and architectural guidelines account for the new statute and add the necessary caveats to sections pertaining to restrictions that no longer apply if ADUs or JDUs are in place.

Two areas in particular where associations may have concerns regarding ADUs and JDUs are view and parking.
It is a well-established tenant of California law that landowners have no right to a view from California common law or statute; however, residents of some associations are granted these rights in their association’s CC&Rs. Conflicts may arise when the construction of an ADU on one association member’s lot would impact another member’s view.

Civil Code § 4751 expressly prohibits, “any provision of a governing document, that either effectively prohibits or unreasonably restricts the construction or use of an accessory dwelling unit…” (Italics added for emphasis). From the legislature’s choice of wording which focuses on the impact of the restriction on individual ADUs, it can be inferred that the legislature intended for this standard to be applied on a lot by lot basis rather than over the community as a whole. This means that restrictions that would generally be applicable to the association as a whole, but would interfere with ADUs on a particular lot would likely be invalid as to that lot. This interpretation would carve out an exception to a member’s right to a view in favor of the construction of ADUs.

While this conclusion will likely be frustrating owners of lots whose view has been diminished, the impact will be somewhat reduced by Government Code § 65852.2. This section of the Government Code restricts the size of an unattached ADU to 1,200 square feet. A structure of this size is unlikely to be two stories. Furthermore, the association’s architectural guidelines can set a reasonable height restriction on the height of ADUs to mitigate potential interference with views without violating Civil Code § 4751.

Going forward, it may be advisable to set residents’ expectations and reduce the likelihood of potential litigation by stating in view provisions of CC&Rs that members’ rights to a view are limited by applicable state and local law, which includes ADUs.

Another area where associations may have issue with ADUs and JDUs is parking. Most planned communities were planned with the assumption that single-family lots would only be used for a single-family and planned the community’s parking accordingly. Under Government Code § 65852.2 (e) (1), a single-family lot can have both an ADU and a JDU leading to three households on a single lot. While it is unlikely that associations will suddenly see their population triple, the impact on parking from a larger population is something associations should be prepared for.

Under Government Code § 65852.22 (b) a local ordinance cannot require that JDUs have additional parking. This is fairly straightforward; however, if an association fails to allow the tenants of JDU to park anywhere in the Associations, such as driveways, safe street parking, or spaces created as guest parking, it may be deemed to have enacted an “unreasonable restriction” on the JDUs and be found in violation of Civil Code § 4751.

Government Code § 65852.2 provides less simple rules for ADU parking. These rules can vary from association to association as the statute gives some level of discretion to local agencies and some parts of the statute vary depending on geography. Government Code § 65852.2 (b) allows for local agencies to provide parking requirements for the implementation of ADUs; however, it also allows for the same agencies to alter other parking requirements in their jurisdiction to accommodate ADUs.

Government Code § 65852.2 further goes on to state that an ADU cannot be required to have more than one parking space, which includes tandem parking on a driveway and street parking in setback areas when it does not impose safety concerns. Additionally, Government Code § 65852.2 (d) states that local agencies cannot impose parking requirements for ADUs depending on the association’s proximity to various amenities.

One such action is to enforce the common restriction that cars be parked in the garage rather than the driveway. If the primary resident’s occupants keep their vehicles in the garage, this frees up the driveway for an ADU resident’s vehicle and a vehicle for a JDU resident if tandem parking is used.

Another option an association may consider depending on the maximum height of its garages is to encourage the use of parking lifts. These cost roughly $3,000 and allow for cars to be stored above one another freeing up more room in garages for additional vehicles. Of course, both parking lifts and better enforcement of garage parking would only be helpful if the garage itself is not used as an ADU or JDU.

It may become necessary for associations to allow for street parking to accommodate the need for more parking. In such cases, it is important that the association carefully designate setback areas for the parking, which would not interfere with fire and life safety conditions.

Our office regularly reviews and updates CC&Rs. If you have questions about the new laws and would like to discuss adding an appendix to your CC&R or amending your architectural guidelines, we invite you to contact our office or call to speak with us personally at 949-729-8002 and our experienced attorneys will be happy to assist you.